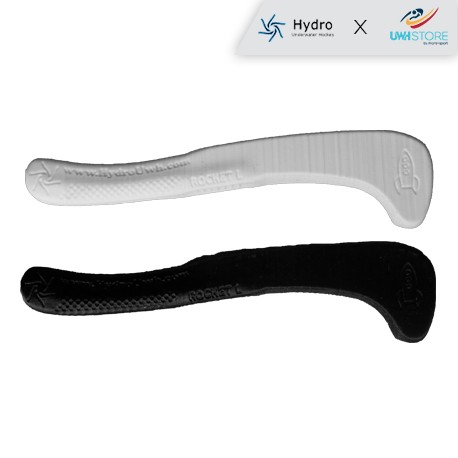 The compact stick for a sharp gameplay.

Sold as a pair: one white stick and one black stick.

The Rocket is a compact stick, a bit shorter than the other sticks of Hydro UWH, it’s specially made for a fast and sharp gameplay.
The weight is massed near the thumb for big hits and an important taper to keep up speed.
The hook is short but very strong, following the radius of the puck to lock it in when tackling and turning.

The handle is textured as well as the thumb grip for a maximum control of the puck.
The front side and the back side of the stick are fully textured for the best control of puck rolling possible. They are also curved and have a 10-degree bevel for an easier and quicker way to make a pass or shoot. Its tapered profile facilitates hand speed and quick skills.

The hard Rocket is made from a solid polyurethane plastic and reinforced with fiberglass for extra strength. This stick is 270mm long.

A bit of history to conclude, this stick is inspired by a 90's design created by Dolan "Pocket Rocket" McGinley.

What’s the difference between the “Hard rocket” and the “Soft rocket” sticks ?

The shape is the same in both models. What changes are the matter used for each stick:

The “hard” version is made from a tough hard and durable polyurethane material and are reinforced with fiberglass strands. In other words, this is the simplest version of any sticks proposed by Hydro UWH.

The “soft” version is a more advanced technology compared to traditional hard sticks.
The particularity of this version is that it’s has a "rubberised" coating which is softer allowing to absorb impacts. The rubber grips the puck in the same way that car tyres grip the road, using grooves and textures to channel water away from the contact area. The result is a stick with another level of puck control and feel when compared to a standard hard plastic stick. The rubber also ads a bouncy effect on the puck which facilitates instant shoots or pass.

The core has also some more advanced materials: it’s constructed from tough polyurethane reinforced with a kevlar-carbon hybrid material to give maximum strength and impact resistance

Avoid corrosive products, it may damage the duration of materials in time. If you want to wash your sticks simply clean it with soap and water.

If the sticks are marked with an opposite colour (like with mark on black stick and black mark on a white stick) caused by a friction, use an erasing method to clean you sticks.

If your sticks suffered from a violent impact (like on goals or the edge of a tile) and that it has created a splinter, use a sanding technique with thin sandpaper to come back to the original smoothness of your sticks.

What is the objective of the partnership between More-Sport and Hydro UWH?

Hydro UWH is a specialized Underwater Hockey brand based in New Zealand. Due to its far location, the cost of having equipment delivered is high (transcontinental delivery charges and customs duties on arrival).

The collaboration between More-Sport and Hydro UWH will allow you to have a competitive and quality Underwater Hockey equipment already imported in Europe, therefore with classic delivery costs!